Just before his death, Jesus went into the temple and disrupted the business supporting the temple operations, by driving out all those who were buying and selling sacrificial animals. It was this act which led to his arrest and crucifixion. 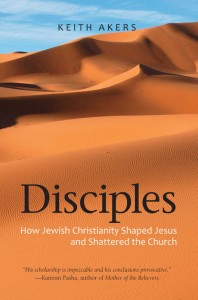 Disciples, by Keith Akers, goes into greater detail about these and other topics.

Jesus was killed because he was a palpable and physical threat to public order. That public order was embodied in the temple in Jerusalem, where animals were constantly sacrificed to appease the desires of a bloodthirsty God — or to appease the priests, depending on your point of view. But why did Jesus do this?

The incident in the temple is often described, in countless Sunday-school lessons, as “Jesus drives out the dishonest money changers.” But it was not about the money changers. This action is one of the few events of Jesus’ life described in all four gospels, and nowhere are the money-changers at the top of the list. (In Luke they are not even mentioned.) It is those who are buying and selling who are Jesus’ targets.

“In the temple he found those who were selling oxen and sheep and pigeons, and the money changers at their business. And making a whip of cords, he drove them all, with the sheep and oxen, out of the temple” (John 2:13-14).

And what were they buying and selling? Animals to be killed as animal sacrifices. Jesus’ intentions would have been instantly understood by anyone who read Isaiah 1: “What to me is the multitude of your sacrifices, says the Lord? . . . I do not delight in the blood of bulls . . . there is blood on your hands, wash yourselves and be clean.”

The Ebionites, the spiritual descendants of the first Christian community in Jerusalem, understood the incident in the temple in just this way. Jesus’ mission was specifically to abolish the animal sacrifices (Recognitions 1.54); God never wanted animals to be sacrificed or to be killed at all (Homilies 3.45). The Ebionite gospel in fact has Jesus declaring, “I have come to destroy the sacrifices” and indignantly rejects eating the Passover meat (Epiphanius, Panarion 30). Jesus says, “I require mercy, not sacrifice” (Matthew 9:13, 12:7).

Think about it: it was the Romans who killed Jesus. A sectarian dispute would not interest them. An angry demonstration, at the height of the Passover season when Jerusalem was crowded with pilgrims and when riots could easily break out (and sometimes did), would interest them. Find the trouble-maker and crucify him. But the trouble that Jesus was making was an act of animal liberation.

This was originally posted on the Compassionate Spirit blog.