Trending
You are at:Home»Campaigns»Sign the petition to stop mass killing of stray dogs in Tirana, Albania

Tirana, Albania – Two years ago, Mayor of Tirana, Albania Erion Valiaj launched a CNVR program (catch, neuter, vaccinate, and release). It seemed to be a good program: it envisaged the catching, registration, vaccination, sterilization, tagging and release of stray dogs back into their territories. Five veterinarians were and still are entrusted with the treatment of stray dogs.

However, this is only how the program appears on paper; in reality, dogs are killed. People have witnessed that stray dogs are caught and never come back. The same is happening with already treated and tagged dogs.

Animal rights organizations in Albania have recently discovered that the Consumer Department bought enough T-61 to kill 3,300 dogs, which served as confirmation of what had been feared for a very long time. T-61 is a euthanizing agent that contains a curare-like paralyzing drug. Its use is enormously cruel and highly controversial. The concern is that if T-61’s paralyzing ingredient takes effect first, it paralyzes the animal’s breathing before they are sedated. This would cause extreme distress to the animal, who would be conscious but paralyzed and unable to breathe. The use of neuromuscular blocking agents such as T-61 in animal euthanasia is widely considered unethical. The vast majority of animal euthanasia is carried out using sodium pentobarbital, and there is strong consensus among humane organizations and veterinary groups that this is the single most humane euthanasia method. 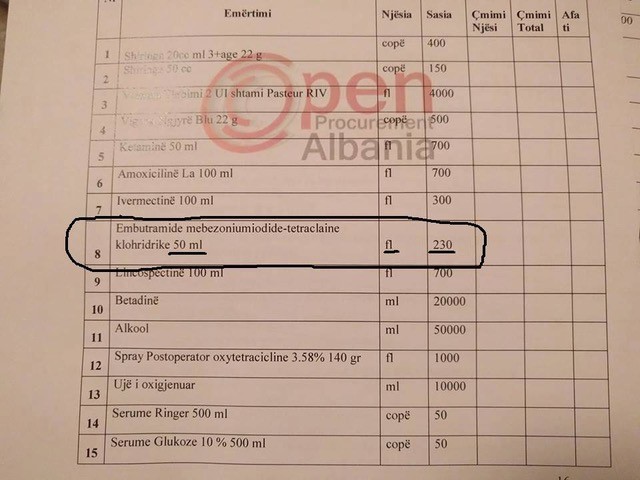 The above image is proof of Tirana’s stray dogs’ bitter fate. It contains part of the list of medicines that the Consumer Department signed off on after the mayor’s order. Item number eight details 230 50-ml vials of T-61. The quantity needed to put a dog down is just five ml. This means that the mayor and his thugs plan to kill between 2,300 and 2,500 dogs per year. The above image is of the clinic in Tirana where stray dogs are supposed to be neutered. The number of stray dogs in this city has actually reduced. Unfortunately, that had nothing to do with the supposed CNVR program, but was because of a murderous and criminal campaign. The practice of killing stray dogs is inhumane. Moreover, it does not constitute a lasting solution. Without sterilization, the dog population will simply increase again and again. This is a short-sighted policy because it costs the state without end, and more importantly, because it causes the death of countless innocent lives. The only humane solution to this situation is CNVR.

Additionally, an effective CNVR program should be combined with awareness-raising measures targeting Tirana’s population as a whole and children in particular. Also necessary are actions targeted to assure responsible dog ownership, including registration of dog owners and microchipping and tagging of dogs, and punishment of citizens who do not obey these rules and who dump dogs.

At this time, protests in Tirana are taking place against Erion Veliaj, Mayor of Tirana; Hermiona Hajdini, chief veterinary officer of the clinic of Kombinat (a suburb of Tirana); Rudina Hoxha, director of the Consumer Department; and the veterinary staff where the dogs are being murdered. All of these parties are guilty of this mass killing of stray dogs. Erion Veliaj, Rudina Hoxha, Hermiona Hajdini and their staff of veterinarians are killing innocent animals, and taking them from the citizens who looked after them.

OIPA has launched a petition in response to the mass killing of stray dogs in Tirana, which will be sent to the Mayor of Tirana, Erion Veliaj.

To the Attention of the Mayor of Tirana Erion Veliaj:

I am upset learning about the mass killings of stray dogs in the streets of Tirana.

I ask you to respect the European Convention for the Protection of Pet Animals, ratified by your country, which decides that when the number of stray animals is a problem, the country must act appropriately in a way that does not cause pain and suffering to animals.

Please launch immediately a REAL dog population control program and show that the city of Tirana respects animals. Dumping dogs is a cruel crime that needs to be severely punished and you must assure it.

Your country is stuck in the Dark Ages. You are putting your city and your country to shame in front of the world.

Personally, I will not visit Albania, and I will ask all my acquaintances to do the same, until this situation will be solved.

Sign the OIPA petition here and stop mass killing of dogs in Tirana!